The Western Cape is cooler than its position might suggest, with conditions that are ideal for growing a wide range of noble wine cultivars. The traditional winegrowing areas along the coastal zone are seldom more than 50 km from the ocean and experience beneficial coastal conditions, especially cool sea breezes. The temperate climate features warm summers and cool winters with frost rarely a problem. Rain falls mainly between May and August, and diminishes in a northerly and northeasterly direction, in the latter case caused by the prominent mountain ranges which follow the coastline, making irrigation essential in these areas. Temperature is probably one of the most important factors affecting the grapevine as it has an effect on almost every aspect of its functioning. Temperatures follow an inverse pattern to rainfall, increasing in a northerly direction and with distance from the sea.

The impressive Cape mountain ranges form a dramatic backdrop to one of the most beautiful wine-producing areas of the world. The vineyards lie on the valley sides and mountain foothills, benefiting from the many different mesoclimates offered by the mountainous terrain and diverse terroirs. There’s constant interaction between the rugged peaks and multi-directional valley slopes, and the proximity of two mighty oceans – in particular the Atlantic, chilled by the icy Benguela current which flows northwards up the west coast of Africa from Antarctica – moderates the summer warmth.

Cooling moisture-laden breezes blow in from the sea during the afternoon, and seasonal fog is prevalent. Adequate sunshine plays an important role too.

This legendary – and sometimes ferocious – southeasterly wind blows across the southwestern Cape during the spring and summer months. Living up to its name, it inhibits the development of disease in the vineyards. The southeaster has a moderating influence on temperature, lowering it by several degrees. It occasionally brings rain to the most southern vineyards in the coastal zone and more seldom carries moisture to the vineyards beyond the first range of mountains.

The effects of sea breezes

The ARC Infruitec-Nietvoorbij automatic weather station network has been installed in the Cape for a number of years, allowing for climatic investigation with the priority being viticultural terroir identification. 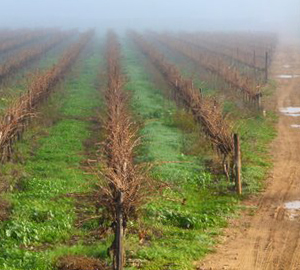 In the Western Cape there is a significant contrast between the cool ocean and the warm inland temperatures. This results in a frequent occurrence of the sea breeze, especially during the maturation period in February (Bonnardot, 1997; 2000) when land temperatures are high (mean February temperature is 22°C at Cape Town International airport compared to 23°C past the first mountain range) and the ocean remains cool due to the cold Benguela current (below 15°C in some places).